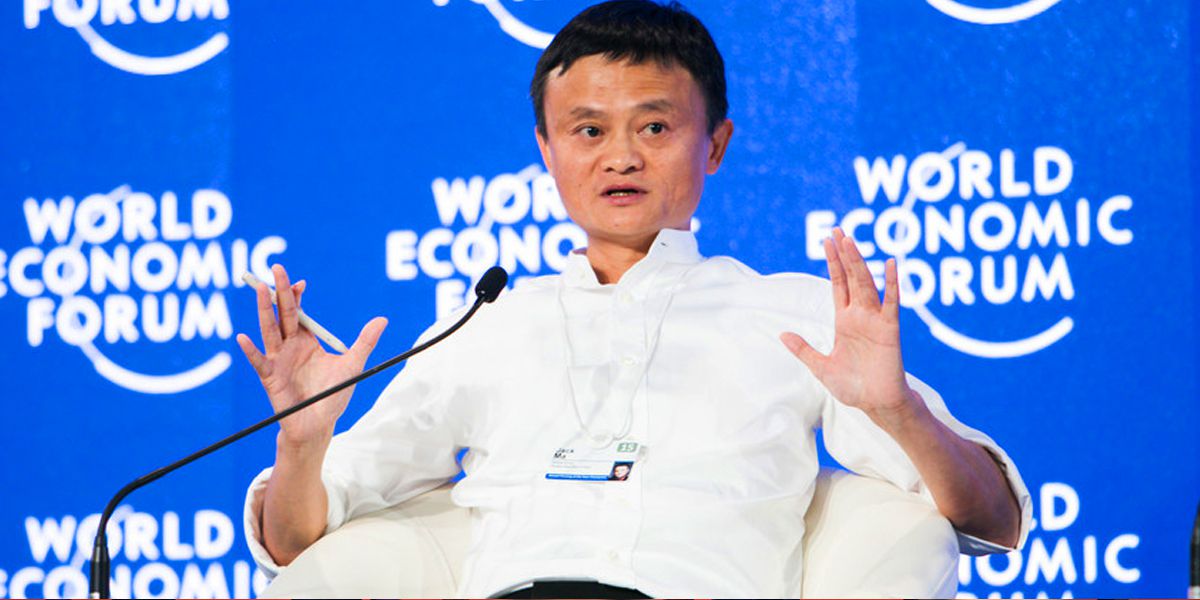 Jack Ma is the founder of China’s first E-commerce website, Alibaba. Jack started the company with his 18 friends. Although he’s no longer the CEO of the company, he’s still a prominent face of the company.

Recently Jack Ma quotes have been floating around the internet.

He is someone who started from scratch in 1999, Jack currently has an estimated worth of $28 billion. Jack has a very charismatic personality; his company’s vision is his first priority. Jack is a great example for young entrepreneurs who want to start their own businesses and follow in Jack’s footsteps.

Below I’ve compiled several insightful quotes that will take you inside the mind of Alibaba’s, Jack Ma. 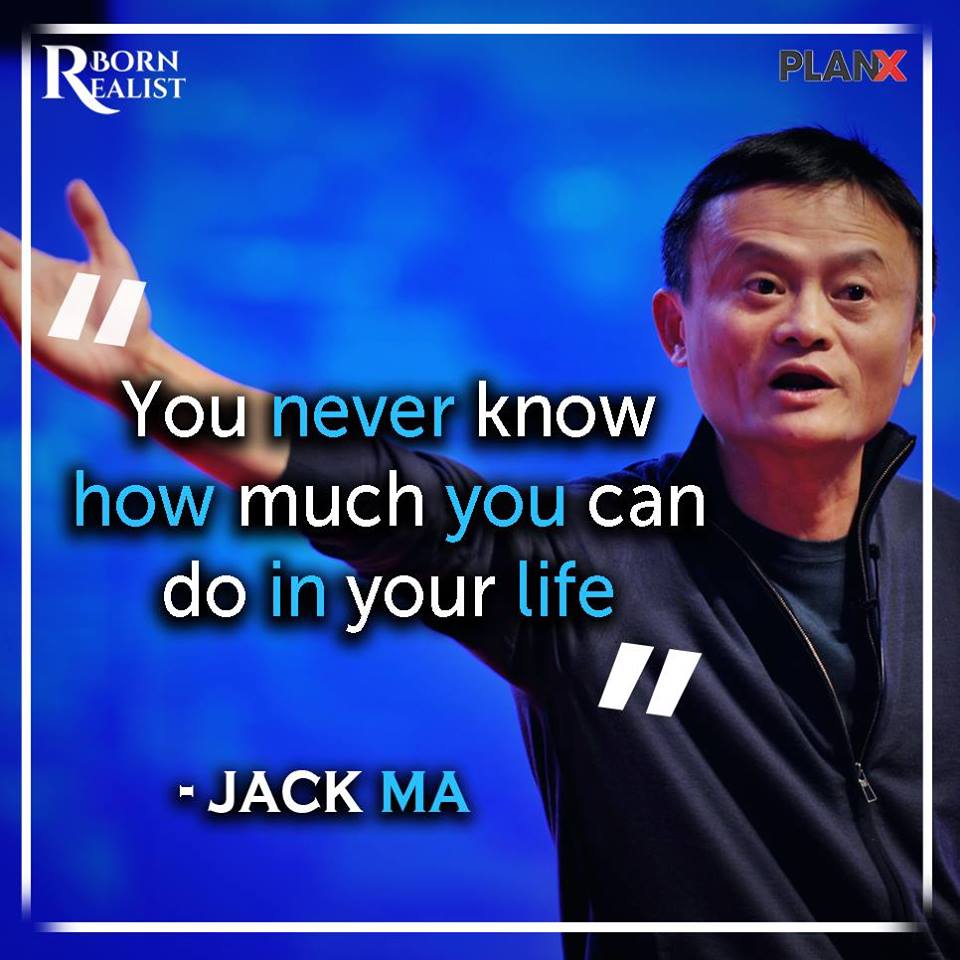 Context: Jack Ma is no stanger to failure, disappointment and being treated like the underdog. However, the man has manged to win many hearts and has build an extremely successful business and has become an inspiration. This quote helps us better understand his thinking and brings forward his more adventurous and risk taking side. The fact that such a huge business man realises that anyone can do anything in life is truly inspiring.

I don’t think I’m a workaholic. Every weekend, I invite my colleagues and friends to my home to play cards. And people, my neighbors, are always surprised because I live on the second-floor apartment, and there are usually 40 pairs of shoes in front of my gate, and people play cards inside and play chess. We have a lot of fun. – Jack Ma Quotes on Business

You should learn from your competitor but never copy. Copy and you die. – Jack Ma

We should keep on going along the path of globalization. Globalization is good… when trade stops, war comes. – Jack Ma Quotes on Business

In the beginning, I just wanted to survive. For the first three years, we made zero revenue. I remember many times when I was trying to pay up, the restaurant owner would say, ‘Your bill was paid.’ And there would be a note saying, ‘Mr. Ma, I’m your customer on the Alibaba platform. I made a lot of money, and I know you don’t, so I paid the bill.’ – Jack Ma

The lessons I learned from the dark days at Alibaba are that you’ve got to make your team have value, innovation, and vision. Also, if you don’t give up, you still have a chance. And, when you are small, you have to be very focused and rely on your brain, not your strength. – Jack Ma Quotes on Business

The big businesses are less willing to take risks. I talked to some young people in Hong Kong, and they said they are lost. Young people indeed have fewer opportunities than before. But is it true that there are no more opportunities for them? No! – Jack Ma Quotes on Business

I want to change history, do something important in my life, and influence individuals like we have with millions of small businesses on Alibaba. Then they love and respect you because you made their life important. – Jack Ma Quotes on Business

My vision is to build an e-commerce ecosystem that allows consumers and businesses to do all aspects of business online.-  Jack Ma 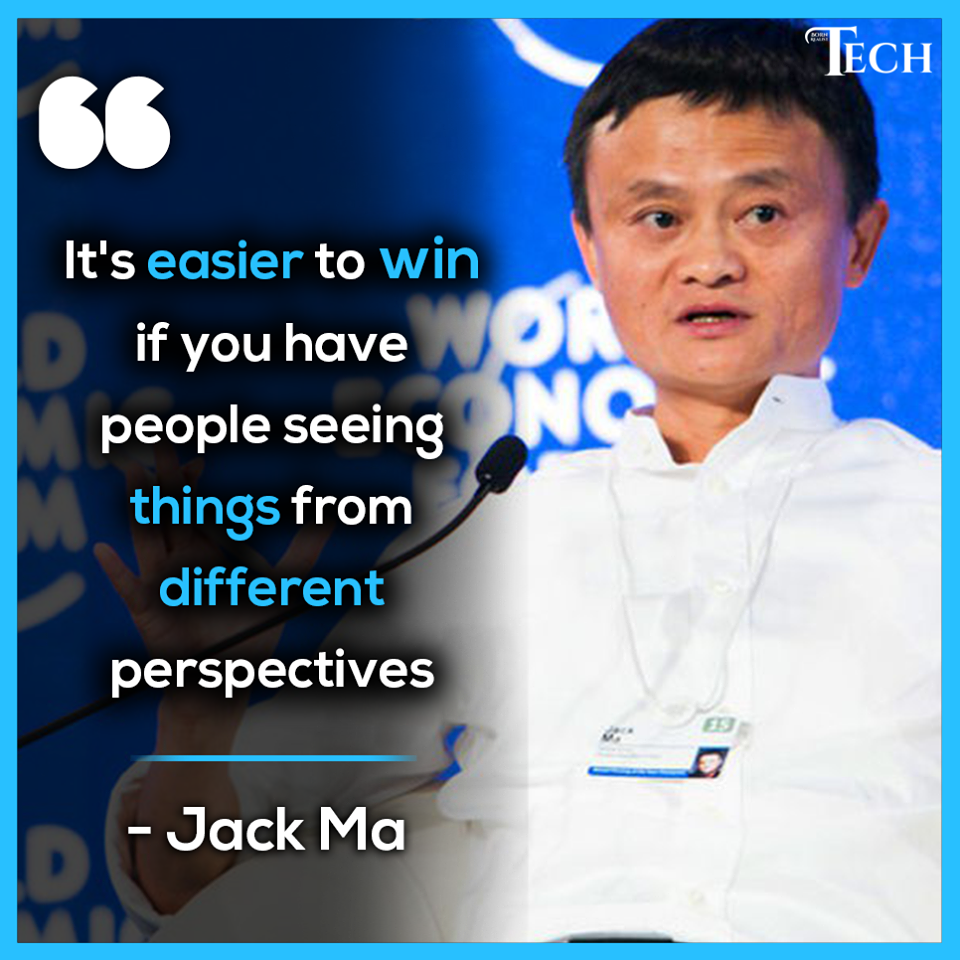 Context: Jack Ma has been through many failures but despite the many forks in his road, he has always held on to hope. This quote is a testament to his strength and he invites us to do the same. If you have people you trust, then its a possibility that you’ll business will flourish.

The very important thing you should have is patience. – Jack Ma Quotes on Leadership

Help young people. Help small guys. Because small guys will be big. Young people will have the seeds you bury in their minds, and when they grow up, they will change the world. – Jack Ma

Trade is a communication of cultures and values. – Jack Ma Quotes on Leadership

The most important thing is to make the technology inclusive – make the world change. Next, pay attention to those people who are 30 years old, because those are the internet generation. They will change the world; they are the builders of the world. – Jack Ma

I want to stress the importance of being fair to our readers. You should not impose your own view and prejudice on the readers and try to lead them to a conclusion. As a reader, I understand what a fair report is. – Jack Ma

There will be sunshine: 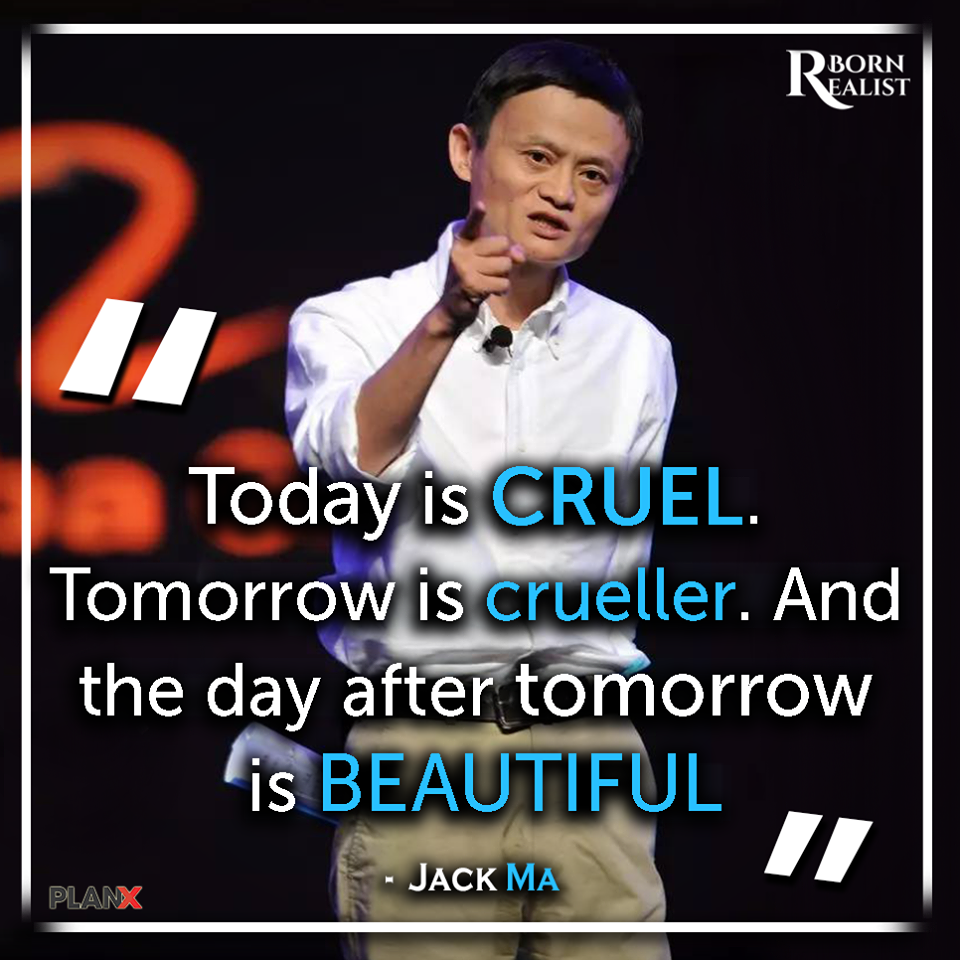 Context: Jack Ma hasn’t had an easy life, being born into poverty he was constantly told that he would never become anything. Today, he has created a multimillion-dollar company and has led it to success. Through this quote, he wishes to teach people to hold on to hope and have strength.

I got my story, my dream, from America. The hero I had is Forrest Gump… I like that guy. I’ve been watching that movie about 10 times. Every time I get frustrated, I watch the movie. I watched the movie before I came here again to New York. I watched the movie again telling me that no matter whatever changed, you are you. – Jack Ma About Life

The best among all Jack Ma quotes! 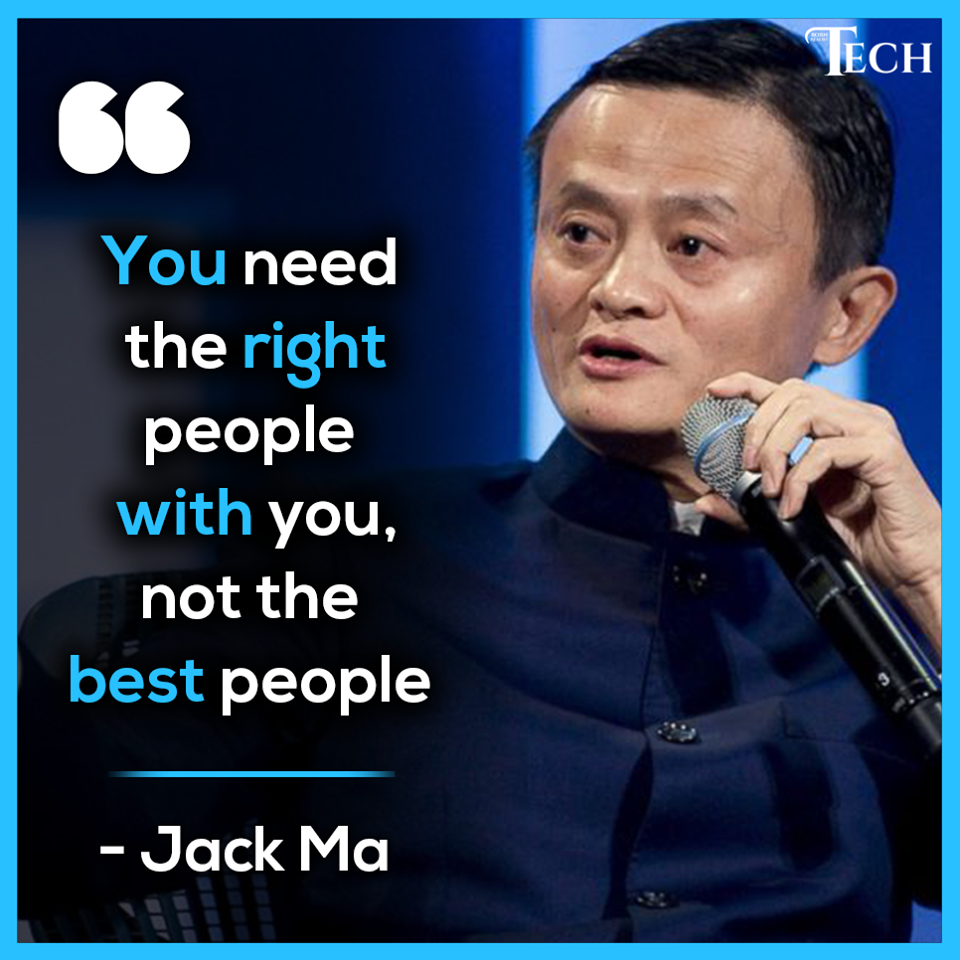 Context: If you are willing to trust people then you don’t need too many, just simply decide who is worth trusting and then bring them forward. 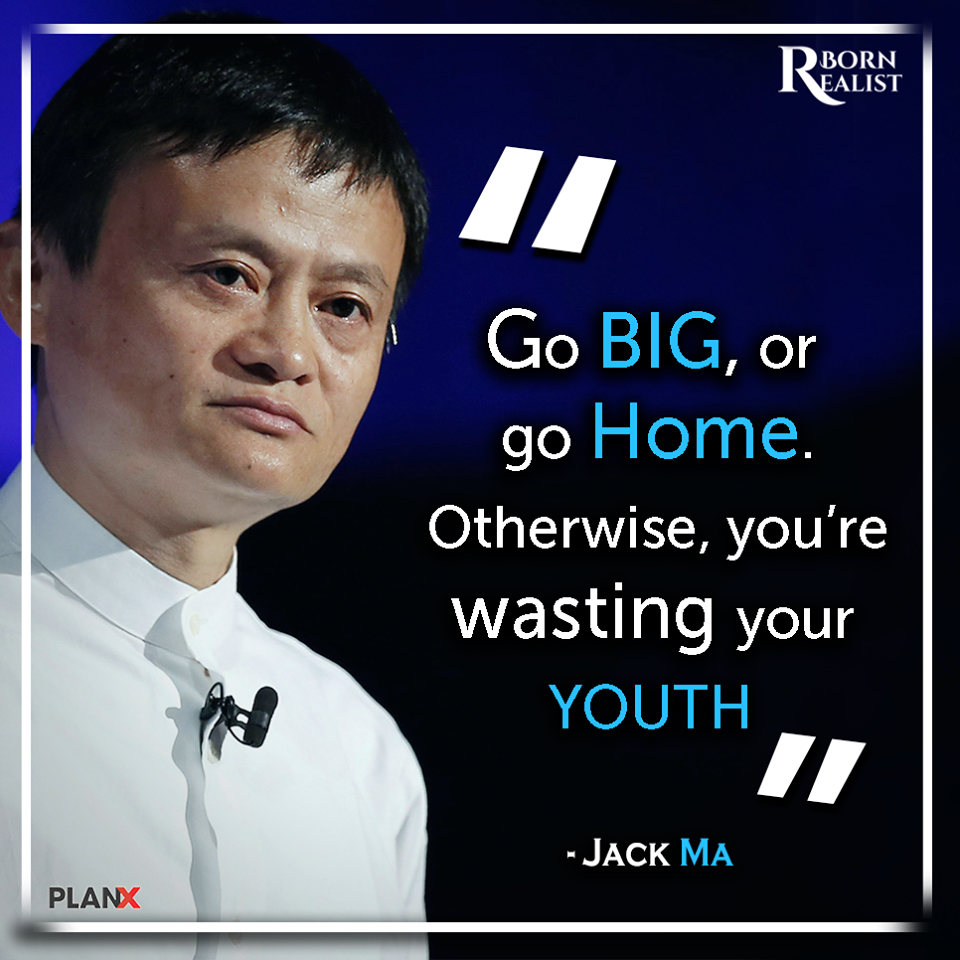 Context: Despite being very successful Jack Ma urges people not to lose sight of what’s most important. A person should be working hard on something huge, what’s the purpose of life if you aren’t doing something worth doing? 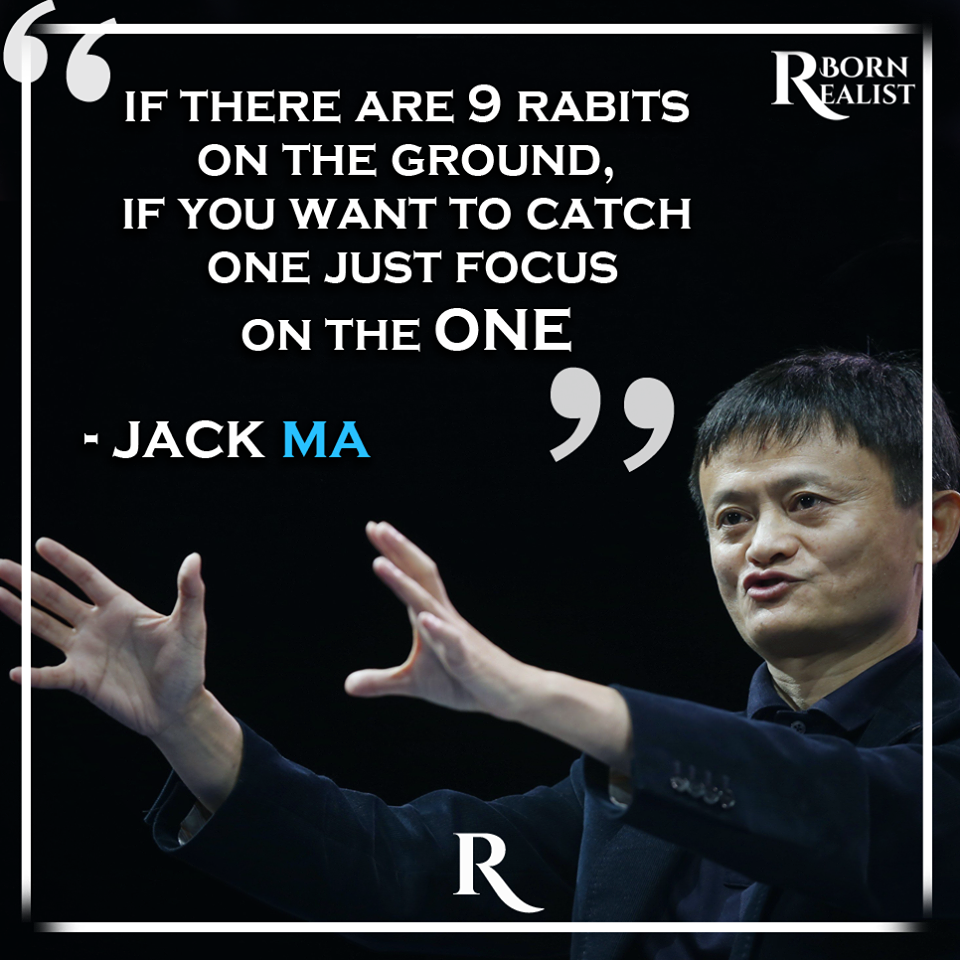 Context: Before we think about making money, we need to learn about the world and discover our passions. Then we need to decide what we want to go for, after that we must focus on only that one ambition.

If we work so hard and put all the money in the hospital to buy medicine – it will be a disaster. Why should we work? So without a healthy environment of this Earth, no matter how much money you make, no matter how wonderful you are, you have a bad disaster. – Jack Ma Quotes on Entreprenuership

When we started the e-commerce, nobody believed that China would have e-commerce because people believed in ‘Guang-shi,’ face-to-face, and all kinds of the network in traditional ways. There’s no trust system in China. – Jack Ma 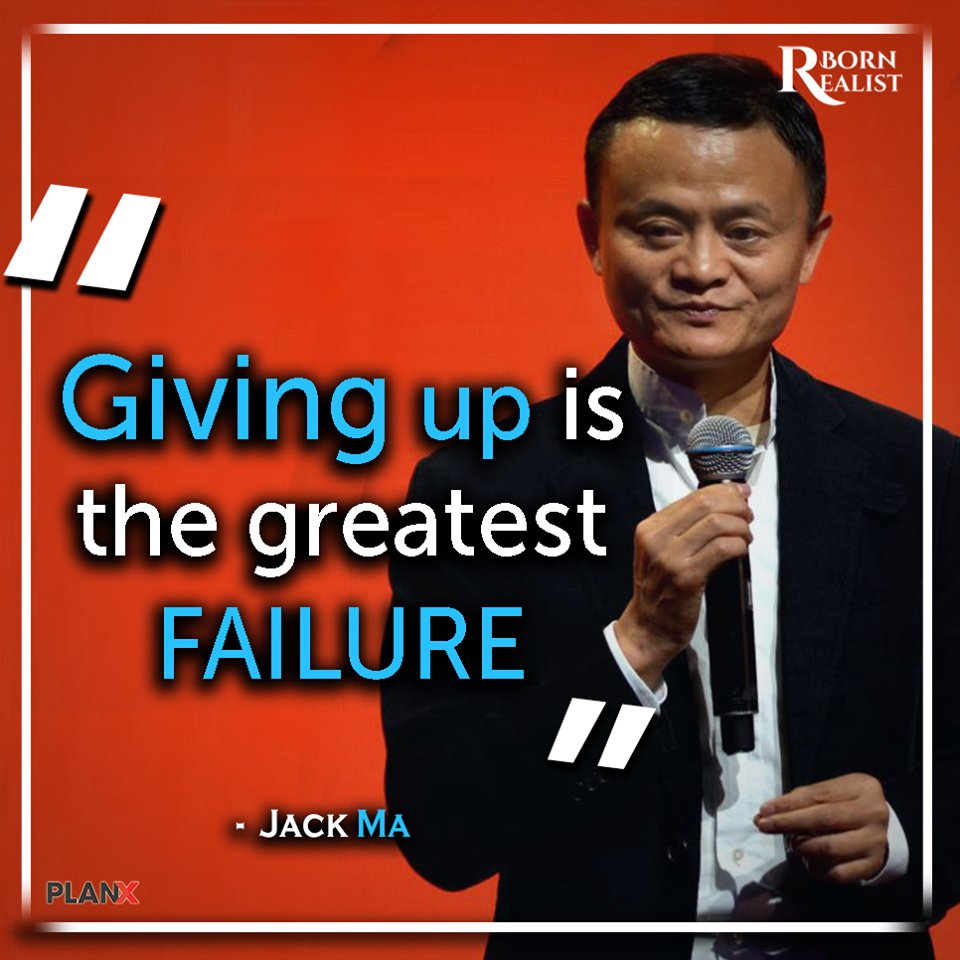 Context: Life can be seriously unfair, but that doesn’t mean we should all sit down and mop about it all day. We have to look for opportunities.

The American multinational companies made millions and millions of dollars from globalization. – Jack Ma Quotes on Jobs 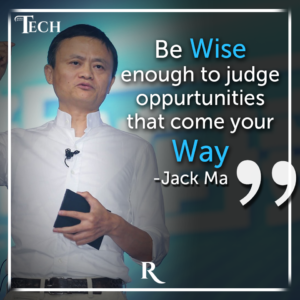 Hong Kong people say Hong Kong needs to preserve its uniqueness. I say Hong Kong’s uniqueness is in its diversity, its tolerance of different cultures… China does not want to see Hong Kong in decline. I have full confidence in its future. – Jack Ma

There’s an examination for young people to go to university. I failed it three times. I failed a lot. So I applied to 30 different jobs and got rejected. I went for a job with the police; they said, ‘You’re no good.’ I even went to KFC when it came to my city. Twenty-four people went for the job. Twenty-three were accepted. – Jack Ma Motivational Quotes

When I am myself, I am happy and have a good result. – Jack Ma

Liked this one? Check out: Bill Gates Quotes About Success